Attempting to tread lightly on the planet

I had my last class for Sustainable Architecture yesterday. My lecturer is a bit of a character and it’s great to hear his opinions (or educated opinion) on the nature of cities. Yesterday we were looking at Santiago, Chile which is his hometown. It’s quite a big place now and in a bit of a challenging pickle as far as city development goes because of the high risk of earthquakes there. This means underground metros and high rise buildings are difficult but just in general infrastructure is not easy to build.

They made astonishing progress after the fall of the Pinochet military dictatorship in 1990, building large amounts of infrastructure through ‘concessionaires’ (I’m not sure if that’s an Englishified Spanish word). This involved quite substantial amounts of road tunnels, suburban/metro railway and highways in general. The principle behind having concessionaires build the roads is they are private entities that look into the costs and benefits of constructing and operating the infrastructure over a certain lease term set by the government in order to make their own profit. That is to say the Chilean government invited the private sector in to build its tollways.

For the most part this was a very successful enterprise as the private sector doesn’t usually get it wrong when it comes to spending millions of dollars on large infrastructure projects that they need to make money from. It’s a bit of a hard task however to estimate this kind of stuff because increasing a toll charge decreases the number of users. Anyway by 2002 (a remarkably short period of time from first consultations in the early 1990s), the Chilean government had managed to set up a substantial number of tollways and highways. The suburban rail came along later and all of it is said to be pretty efficiently operating. In recent years the growth in the city’s population has lead to more congestion again, so there is renewed discussion on the value of the toll (which directly impacts the demand) or the alternative of increasing the number of lanes of the main highways. The jury remains out on this one.

But where this comes into sustainable transport is that there are virtually no inter city trains connecting the country together. Despite being pretty much perfect for a north south train line down the length of the country, it remains not cost competitive against buses and cars below 500km and with planes above 500km. The seriously squeezed nature of the rail sector has meant it hasn’t been widely developed in any space where it does not have a measurable benefit in reducing inner city congestion and pollution. So nothing beyond the metro line in the major cities is being developed.

The story is very different in the developed world with generally significant expansions of the rail sector in recent years as a focus over the pre 1970s highway building golden era. Australia remains in this golden age thanks to the current anti environment government… But I digress. America has a quite established rail network as does Europe and the expansion of China’s high speed network is nothing short of mind-boggling. There are key differences in every case despite them all being built with government funding. America ships 90% of its land freight through the rail network and there are limited numbers of passenger trains running. Europe’s focus has been much more on passenger movements with the high speed network. And China is unclear although the current developments would suggest greater focus on passengers as well.

Why is this the case given that many parts of the developing world (although Chile is rapidly leaving this territory) are reluctant to invest in inter city rail for the aforementioned reasons. My lecturer’s view is that it’s a rich man’s game. I haven’t been able to find evidence for some of the comments he made but it is probably reasonable to say that High Speed Rail is only utilised by the wealthy (he said mostly by the top 1%). Despite being a rich man’s game, it still remains quite highly subsidised as the costs involved are pretty substantial. I can’t say a whole lot about the HSR sector but I can say it’s not that cost competitive with flying when getting to Norway. I can tell you now that the cost of all my bookings via train and the final ferry link has been 234 Euros (just shy of £200).

So it’s hard to know really how true this is. It cannot be said that travelling by plane is the logical alternative to HSR either and the domestic European market may be one of the rare examples where this can be the case thanks to the significant numbers of budget carriers.

Some proponents of the new build HSR say that the experience needs to become more like the domestic plane market. A low baggage, lots of seats and high % utilisation equation was being proposed recently by the former British Rail executive now CEO of Melbourne’s Metro Trains. This was going to be done by radically changing the proposed corridor for high speed between Sydney and Melbourne through elevating the entirety of the track in a viaduct (which would of course need to be a very cheap and modular design that can be installed with minimum cost). Read more here.

My other finding that supports this thought is the development in Japan of something even more plane like in combination with high speed rail:

And this actually is flying so the concerns of normal flight are legitimate here. Currently it’s only in testing stages with this prototype and I can’t really see this taking off (mind the pun).

I think it’ll be very interesting to see what happens with the currently proposed high speed rail lines in the world: Birmingham to London, Oslo to Stockholm, Brisbane to Melbourne, Los Angeles to San Francisco are just a few in the places I’ve recently visited. Each place has it’s own unique situation and so there’s not a single formulaic solution to this but perhaps the train-plane experience could take off, or perhaps HSR could take a serious twist in its fortunes and drop off the political radar in favour of the bus routes and improved railway signalling on existing infrastructure?

For quite a while I had a couple of my classmates telling me that my trip was very normal for Europeans and that this was effectively a way finding route. But narrowing down the options to attempt to make the best value out of a what is a relatively quite high cost trip is not so easy (and travelling in Europe is not the same everywhere – my thought is that very few people take a similar route to me unless they are planning on seeing things on the way).

I was able to rule out ferries and cargo freighters fairly early on (although I’m going to keep an eye on the option of travelling by cargo freighter for any future short trips). Buses looked to be a bit of a nightmare and hitchhiking isn’t always as successful as the Cambridge Jailbreak teams make it seem (managing to collect enough money from donations to fly to Sydney within a 36 hour time limit is impressive by any standards – don’t know how much help this is for the charities they are fundraising for though).

My next post (since my predictions of what I’ll be writing about in future weeks is always accurate) should look again at the issue of transportation of foods and other freight/logistics considerations. I saw on an alternative route home two days ago some interesting changes to the nearby park that’s a very small step in the scheme of things but makes for interesting discussion. I’ll leave just a picture as a hint for next time: 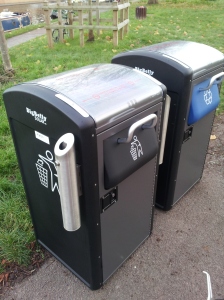