Attempting to tread lightly on the planet

Flyfri ferie is a Norwegian expression I first saw written on the excellent Norwegian blog Grønne Jenter (Green Girls). It means airplane-free holiday but sounds nicer with the alliteration from Norwegian :). The equivalent expression could be staycation (combining with vacation) but I think ‘stay’ doesn’t have such positive connotations in the context of holidays.

It sounds of course like a massive first world problem, doesn’t it? ‘Oh I cannot take my weekend shopping trip to New York with my friends because I am ethically opposed to flying… ‘ (this is actually a thing in Norway – rare as it may be).

In many ways it is a luxurious problem (not that I would ever take a weekend trip to New York personally). But it’s a growing problem amongst those fortunate enough to live in developed countries because of the incredible affordability of air travel today. I’ve written more than enough on the background for this blog though, so I want to look into alternatives to the mass-flying culture that I regularly participate in.

This summer me and my girlfriend planned to stay in Norway. First in the south of Norway relaxing by the seaside and later doing some walking in the western fjords of Hardanger. Being rather badly prepared for this type of holiday meant that we unfortunately went well over our new things budget for the month (I bought 4 new items in July – mostly related to camping needs). I also broke my two red meat meals a month limit (with 3 portions)… but we did manage to avoid flying during our 3 week staycation!

I’ve written earlier about my experiences taking the train to the south of Norway from Trondheim (a pretty nice train ride even after having taken it quite a lot in the last couple of years). This time we took the night train down to Oslo and transferred to the Kristiansand and Arendal trains the next morning. I sleep rather poorly in moving vehicles, but I’ve decided that it’s something I’m going to try and get better at through practice.

A week later we took the train to Sandnes to meet some friends followed by a road trip up to Hardanger. Cars of course aren’t especially great in environmental terms but we made the excuse this time since we were delivering the family car back to Arendal (such that the rest of the family could come home a bit easier with all of the luggage they have at the end of the summer). 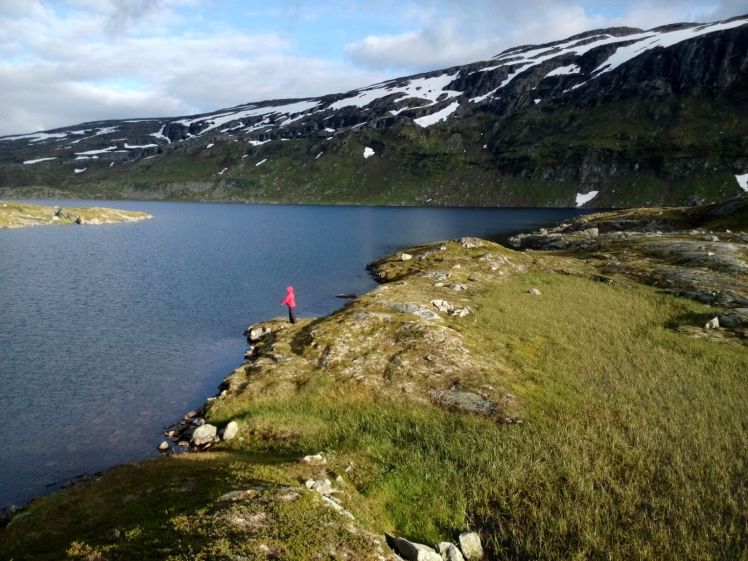 After a nice few walks in Hardanger and a good dose of disappointing trout fishing (possibly because I’ve never done it before and had the wrong equipment), we drove back over Haukelifjellet to Arendal. Back into southern Norway’s sunny domains for a final few days before we took the train to Oslo. Another stop, another few friends and then the fourth and final train trip back up to Trondheim again.

A total train distance of nearly 2000km (this time with electric trains rather than their rather polluting diesel counterparts). Train related carbon emissions are only approximate based on NSB’s (the Norwegian state rail operator) environmental calculator and came out to 31kg (most likely because NSB does not purchase Renewable Energy Certificates). The equivalent flights that these 4 train trips replaced were equivalent to 210kg (a return flight from Trondheim to Kristiansand and a one way flight from Kristiansand to Stavanger).

A saving of 180kg (per person) for a Norwegian holiday ain’t so bad, and it certainly wasn’t as though it cost us a fortune extra. The sleeping cabin on the night train comes at a premium of course but otherwise the tickets were cost competitive with flying (possibly even better when you take into account the bus or train transfers to the airport as well).

And I am increasingly seeing more of my friends take the train when they travel on the Oslo-Trondheim stretch. I coincidentally met one on my trip to Oslo in mid-June, whilst we had two friends who came to visit us from Oslo by train. One of my former housemates regularly used the train to go back to Oslo at the end of the semester and a colleague of mine pretty much refuses to fly on this city pair. The fully packed train home last Saturday was testament to this increasing demand for slow travel and a great sign of a change in environmental consciousness.

There is still however the majority of people I know in Trondheim who fly to Oslo (often related to a connecting flight thanks to SAS and Norwegian’s hub base there), but it seems that winds of change are soon upon us. And together with the slow travel movement it seems that there is some pretty astonishing optimism from the pilots of Solar Impulse who recently completed a global circumnavigation by solar plane: “Before 10 years’ time, we will have short-haul electric airplanes for 50 people.”